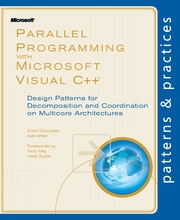 Referred to as the Campbell Book.

The exercises offered are not rigorous enough. They should be hard programming problems. I'll have to look elsewhere for parallel programming exercises.

Multithreaded execution executes separate programs on the same processor with each interrupting the other for resources. Parallel execution is one program executing across many processors while not interrupting each other.

A Word about Terminology

Concurrency is related to multitasking and asynchronous input-output (I/O). It usually refers to the multiple thread execution that may each get a time slice to execute before being preempted by another thread, which also gets a time slice. Concurrency is necessary for a program to react to external stimuli such as user input, devices, sensors, and other interrupts. Operating systems and games, by their very nature, are concurrent, even on one core. Concurrency is about correctness and speed.

With parallelism, concurrent threads execute at the same time on multiple cores. Parallel programming focuses on improving application performance across multiple processor cores and are not constantly interrupted when multiple cores are available. Parallelism is about throughput.

Amdahl's Law[8][9] limits parallelism. There is a ceiling and floor for everything.
The real-world performance increase is less than Amdahl's Law predicts due to increased overhead from coordinating between parallel threads and cores. $$ \text{Speedup According to Amdahl's Law}=\frac{1}{(1-P) + (P/N)}$$ Where P is the potential parallelism in the program, N is the processor count, and 1-P is the sequential part.

What hardware will the program run on? How many CPU cores will it have? Or have available? Since software outlives hardware the best approach is using libraries, like PPL, to manage task scheduling. Using a mutex queued with threads and hand-crafted locks is a sure way to turn a perfectly good parallel program into a sequential dinosaur.

Task order and potential parallelism in a program are constrained by the underlying algorithms used. Constraints can arise from control flow (algorithm steps) or data flow (input and output availability). Understanding the constraints will reveal which parallel patterns are useful. Remember, a program might use more than one pattern.

When tasks running in parallel need to share data each, in a different context, will lock in a race condition trying to update or read the same memory location.

The parallelism degree is not expressed in the code, but during the run-time execution by the library.

How can you tell if the steps in a loop are independent? A declared variable shared by two or more steps would make them dependent and introduce errors because that variable would have different values at different times depending on which parallel task was using it. Objects in the loop might share an underlying variable that will introduce subtle bugs for the same reason. Using data accessors on an object:

There is a possibility that GetParent accesses a single, shared object.

In this example the three data references will each execute in a different thread, and each with a different value for i.

Parallel methods do not guarantee any particular execution order. Unlike a sequential method, some higher-valued indices might be processed before some lower-valued indices.

Notice the results is passed by reference and the loop's execution order does not matter.

Your best options are to look elsewhere in your program for opportunities for parallelism or to analyze your algorithm and see if it matches some of the advanced parallel patterns that occur in scientific computing. Parallel scan and parallel dynamic programming are examples of these patterns.

Each iteration of the outer (parallel) loop handles a range of indices instead of individual indices. By grouping iterations into ranges, you can avoid some of the overhead of a normal parallel loop.

The term degree of parallelism refers to how many cores are used to process iterations simultaneously. Usually the degree is managed by libraries.

Anti-Patterns: The things that can go wrong.

The term degree of parallelism refers to how many cores are used to process iterations simultaneously. While not recommended these can be set by adjusting the MinConcurrency and MaxConcurrency policies in the SchedulerPolicy class.

Parallel Loops is applying a single operation to many data elements. Data Parallelism.

The Basics - New Section. The Mechanism. Use the parallel_invoke method. The example below invokes the sequential methods DoLeft(); and DoRight(); in parallel.

A task can suspend its execution and relinquish control to the task scheduler until a specific condition is met.

Use the cancel method to cancel all the tasks in a task group from any thread. If two tasks in different groups are cooperating and one task is canceled, the other task will throw an exception. A deadlock will occur if two tasks from different groups are cooperating and one is waiting for the other after a cancellation. Cancellations can propagate between task groups under certain circumstances. A cancellation request automatically propagates to another task group if a call to that group’s wait method is blocking a task from a task group that is being cancelled.

In the Parallel Asynchronous Speculative Execution example each search invokes the task_group::cancel method once a solution is found.

The SearchLeft method shown below invokes the cancel command upon completion.

In C++, a closure[11] can be created using a lambda expression that represents an unnamed (anonymous) function. Closures can refer to variables defined outside their lexical scope, such as local variables that were declared in a scope that contains the closure.

In an incorrectly written closure captured variables might not behave as expected, especially in parallel programs. Problems occur when referencing a variable without considering its scope. Here’s an example.

This code is intended to print 1,2,3, and 4 in an arbitrary order but that won't happen. The i is passed by reference so the actual value for i and shared by all the closures created by each step in the for loop. By the time a task starts i 's value will be different from when the task was created.

The solution is passing the shared variable by value in the appropriate scope.

Now it prints the numbers 1,2,3,4 in an arbitrary order as intended.

API calls into the parallel library may create task groups that are internal to the library. If a task calls APIs you might unintentionally create a situation where your task group is waiting on a task group inside the API. Invoking the cancel method may implicitly cause the cancellation of task groups that were created by the library. This is called Transitive Propagation Cancellation and might not be the intended behavior. In some cases, you may prefer the library functions run to completion even though a higher-level component is beginning to shut down.

To avoid unintended propagation in a runtime context use a neutral, non-PPL thread context to call into any library functions that may depend on task group wait operations.

After invoking run call the object's wait method to allow all the tasks to complete before destroying the task group. Otherwise the runtime will throw a missing wait exception.

When a task begins to run, the applicable task scheduler invokes the task’s work function in a thread it chooses. Tasks do not migrate among threads at run time. This lets you use thread-affine abstractions, like critical sections, because you don't have to worry about the task operating in different threads.

Answer Question 1.
Using Data Parallelism and not Task Parallelism. First, rewrite the program to take the images, perform all operations on each image, then blend them. Data centric vs. Task centric. So you'd simply put a while loop in "ParallelTaskGroupImageProcessing" method. In this example, no real difference either way.

An aggregation, say computing a sum, breaks under parallel loops because the 'count' variable is shared by all iterations. The Parallel Aggregation Pattern, a.k.a Parallel Reduction Pattern, solves this.
p.46 The answer is not to apply synchronization operations to the existing sequential algorithm in order to make it “safe” for parallel execution.

Exercises. No programming exercise. I'll need to find them elsewhere.
Done, onto chapter 5

The “Parallel Tasks Pattern” allows forking the flow of control in a program. In the "Parallel Future Pattern" the control flow and data flow can be integrated. A future is a stand-in for a computational result that is initially unknown but becomes available at a later time. Calculating the result can occur in parallel with other computations. The Futures Pattern integrates task parallelism with arguments and return values.

Futures express potential parallelism by decomposing a sequential operation into futures. This can result in faster execution if hardware re- sources are available for parallel execution. However, if all cores are otherwise occupied, futures will be evaluated without parallelism.

A future is a task that returns a value when a value is ready. No need to use an explicit wait command. If the task has already finished, its result is waiting and is immediately returned. If the task is running but has not yet finished, the thread that needs the result blocks until the result value becomes available. If the task hasn’t started yet, the pending task may be executed in the current thread context.

The single_assignment class that is used is a messaging buffer. The send and receive functions allow for concurrency-safe communication with single data values. Messaging buffers are covered in “Pipelines.”